Top Gun: Maverick and the Value of Your Difference

The one. Charlie doesn’t mean “the best.” She means the one people like to talk about, to pay attention to — to remember. For Lt. Pete Mitchell, call sign “Maverick,” he wasn’t the best, but he was the one. We’ll come back to this.

Top Gun (1986) introduced audiences to a parade of things that would become iconic: dazzling aerial choreography, an inverted middle finger at 6-G’s (“I’ve got a great Polaroid of it”), buzzing the tower, Meg Ryan, that gong sound in the theme music, the beginning of Tom Cruise’s fixation on insane stunt work, the beginning of Tom Cruise quite possibly being insane, profuse sweat, thinking that singing to a random woman in a bar is a good idea, a highway to the danger zone, sand volleyball inexplicably being played in jeans, and with due respect to Sully Sullenberg, America’s most beloved mustachioed co-pilot. Talk to me, Goose.

I feel the need. The need for speed.

Top Gun is a tapestry of spectacle and bravado slathered in baby oil and beloved to this day. 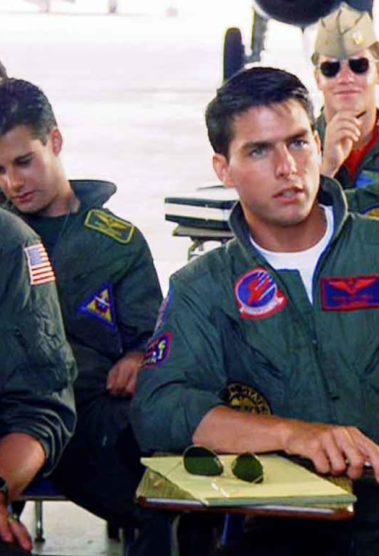 But our conversation here stems from a less-cited exchange early in the film. It’s one of the many machismo-laced quips in the banter between Maverick & Goose, and rivals, Iceman & Slider. Before commencing the competition to be immortalized as TOPGUN’s best, Slider offers this final provision: “Remember boys, no points for second place.”

In real life, this is nonsense. We acknowledge there isn’t a single organization that’s not trying to be in first place — to be the best. That’s the point, isn’t it? Well, it’s not that simple.

Every choice creates a competitive reaction. If competitors are copying you, great! You’re doing something in which you’re seen as the winner. But what if you’re the one catching up? And what if it’s in a game you can’t win? Call it quits? Of course not. We can’t all be Amazon, Apple, Walmart, or the usual suspects in that cohort. Our value exists in the ways in which we’re not them. And that value needs to be made clear. “Us too” isn’t much of a brand position. 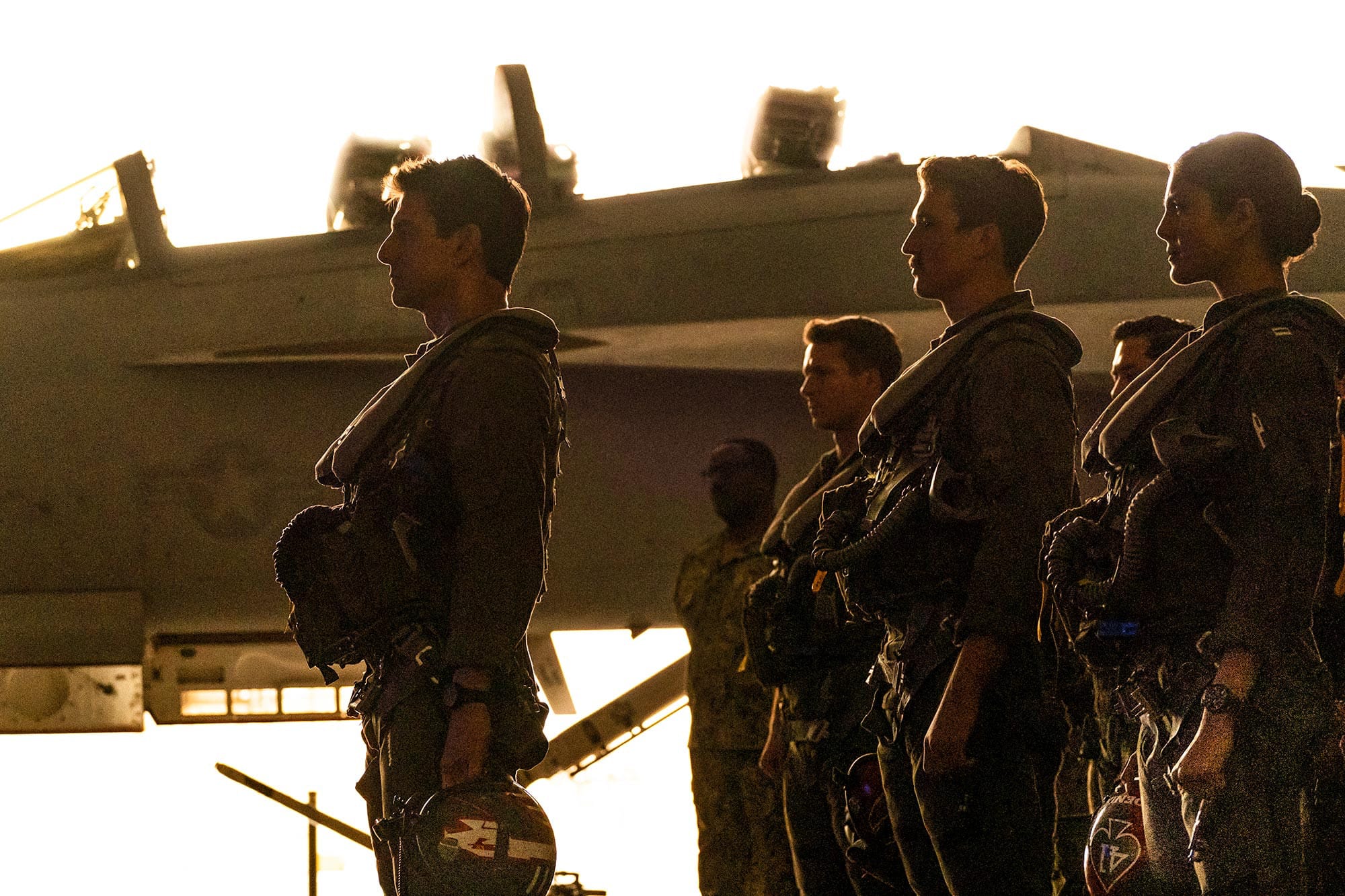 The more an industry’s competitors try to mimic “the best,” the more similar they will be to each other. It may help to shore up some weaknesses, but it does little to elevate unique value. And if we’re all acting the same and positioning our brands similarly, the only clear differentiator consumers will see is price.

Clients often tell us, “our customers are very price-sensitive.” Maybe. But it’s possible they’re only sensitive to price because it’s the only difference they can find among their choices. If everyone’s value appears to be the same, why wouldn’t they choose on price? This is a zero-sum game. And the winning comes cheap.

Companies rarely enter zero-sum competition. And yet, quite a few position themselves as if they’re winning one. Industries are full of brands that look and sound the same. They swarm consumers with claims of unparalleled, unrivaled, the most, the best. This issue is bigger than lazy copywriting. It’s the habits of an antiquated advertising industrial complex. Brands presume that being loud is the same as being heard. The result of a shouting match isn’t attraction, it’s attrition.

Even the most premium products have to pull people to their brand. Audiences don’t want to marvel at Maverick. They want to see themselves in Maverick. It takes a lot more than just fancy flying.

For an effective brand strategy, the goal is to compete to be different. That means accepting trade-offs and disproportionately investing in the ways in which you create value that’s difficult for competitors to replicate.

Then comes the hard part: creating buy-in across your organization and persistently activating that value in novel ways.

What excites your employees? What’s unique about your relationship with consumers? What values do you share? How do you make price less central to their purchase decision? This is where your difference lives. It’s where you create value instead of the exhaustion of chasing it.

From these answers, you’ll know how to articulate your value, purpose, direction and competitive advantage in simple, meaningful terms. These are the arbiters for how you energize your people and distinguish yourself in the market. Without making this core to your brand strategy, your employees and your consumers will eventually sing that they’ve lost that loving feeling (woah-oh). 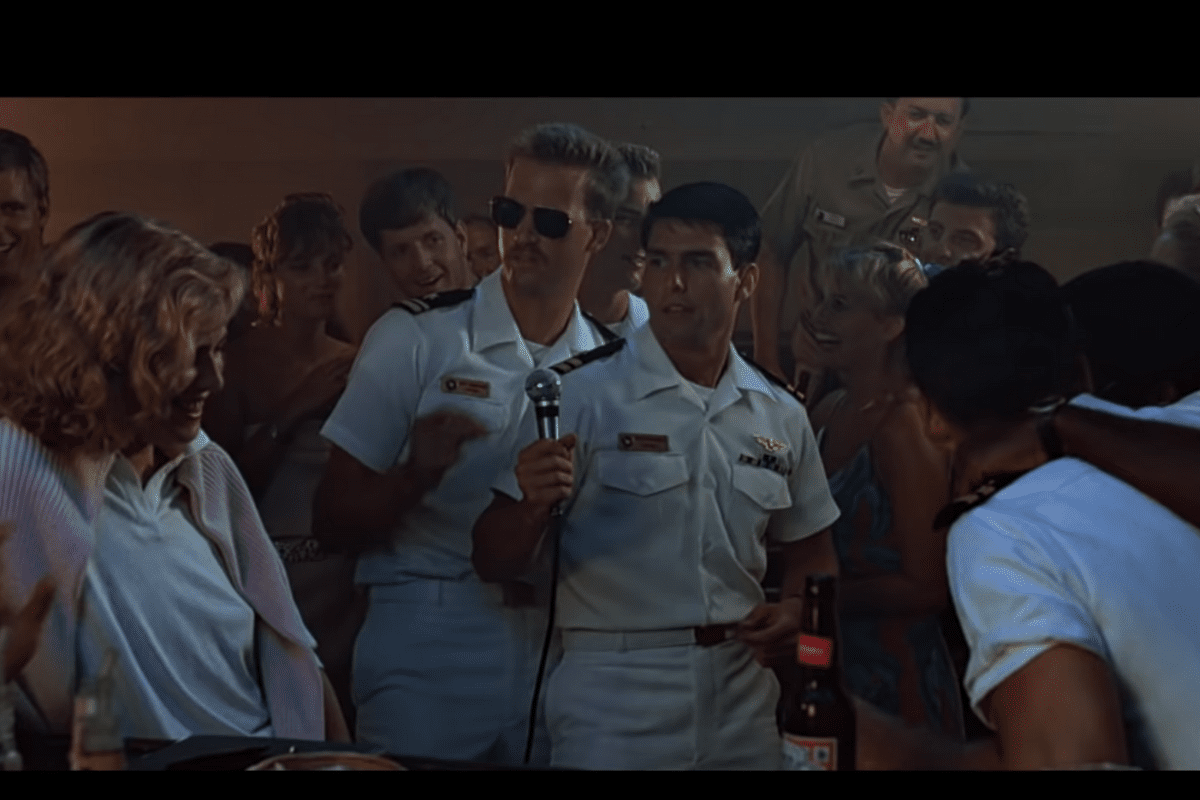 This may feel obvious. And yet, our work routinely summons this truth: don’t conflate obvious with easy. Companies who consistently deliver on their difference understand how complicated it is. It requires relating to and moving people. And there is nothing more complex than the human condition. Can you ever be the best at that? Negative, Ghost Rider.

There’s never one best way. Focus less on keeping pace with the competition, and instead, invest your energy in what pulls you ahead of the competition. It’s not about being the best, it’s about what enables you to be at your best.

If you recall, Maverick fails to finish in first. But he saves the day, finds peace, falls in love, and becomes a near-mythical legend in the Navy. Iceman is the best. Maverick is the one people remember.

Pete Mitchell was never going to win TOPGUN’s game. When he plays it like the rest, he’s a lesser pilot. It’s right there in his call sign. Maverick wins when he does things differently. 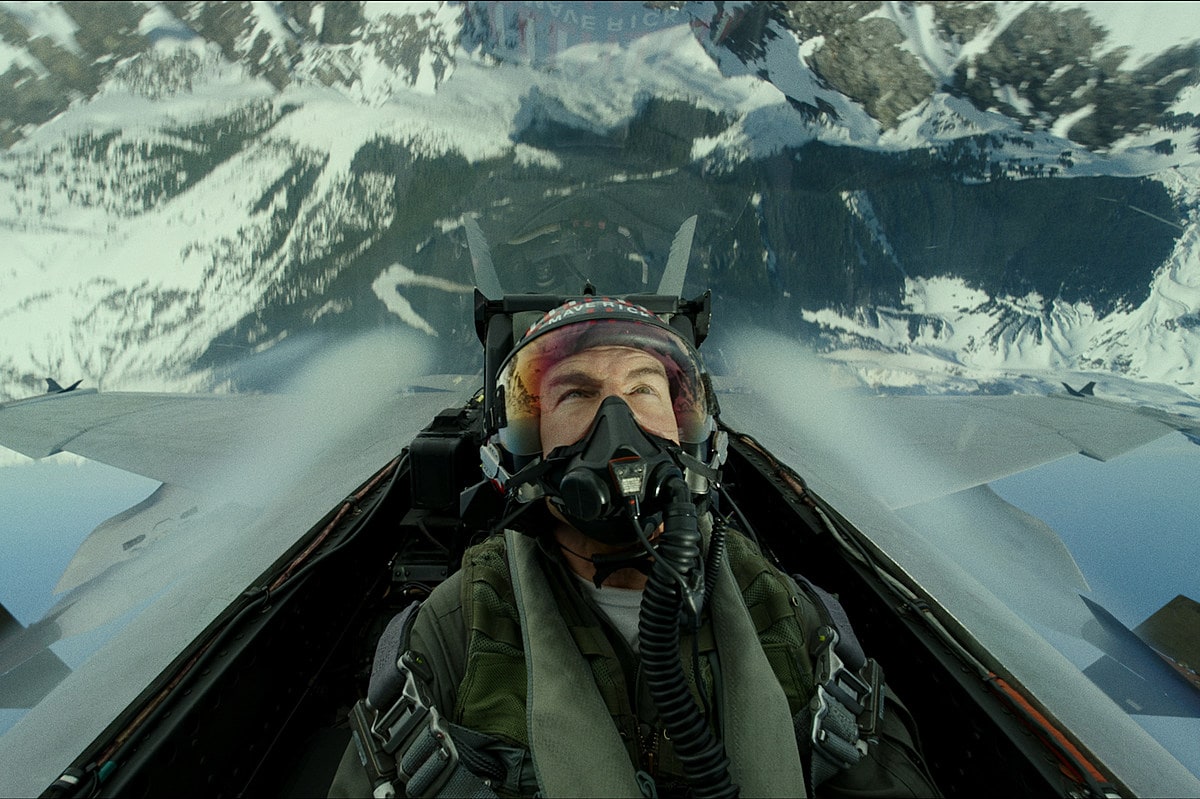 36 years later, Tom Cruise and his Ray-Ban’s return to Miramir. But this time, there’s a mission occurring on and off the screen. The enigmatic superstar is about to show a two-trillion dollar industry the value in knowing what makes you different.

Top Gun: Maverick can be a metacommentary on Cruise himself. He feels like the last movie star of a bygone era. The metrics that command today’s big time blockbusters dilute what stars with ineffable charisma can get made and have lessened the tolerance for risk. That’s a problem for Cruise. His gift is charisma and his brand is risk. He doesn’t show signs of returning to films with smaller price tags (Jerry Maguire and Rain Man would be TV shows today, right?). And at 60, he doesn’t seem interested in pivoting to elder statesman like his mentors, notably his Color of Money co-star with a similar magnetism, Paul Newman. For now, Cruise intends to keep hanging off of airplanes.

The energy and ambition that made him a star hasn’t dimmed a bit. Cruise still wants to be the hotshot. If you asked him, “so you’re the one?” today, he still wants to give you the same answer: “Yes, ma’am.” His recent resurgence is due, in part, to admitting that it’s a hell of a lot of fun to let this man keep flying into the danger zone. Frankly, nobody’s better at it. The big-screen era that made him feels over. But Cruise is intent on reminding his industry, the more things change, the more they stay the same. And Cruise knows exactly what has stayed the same. 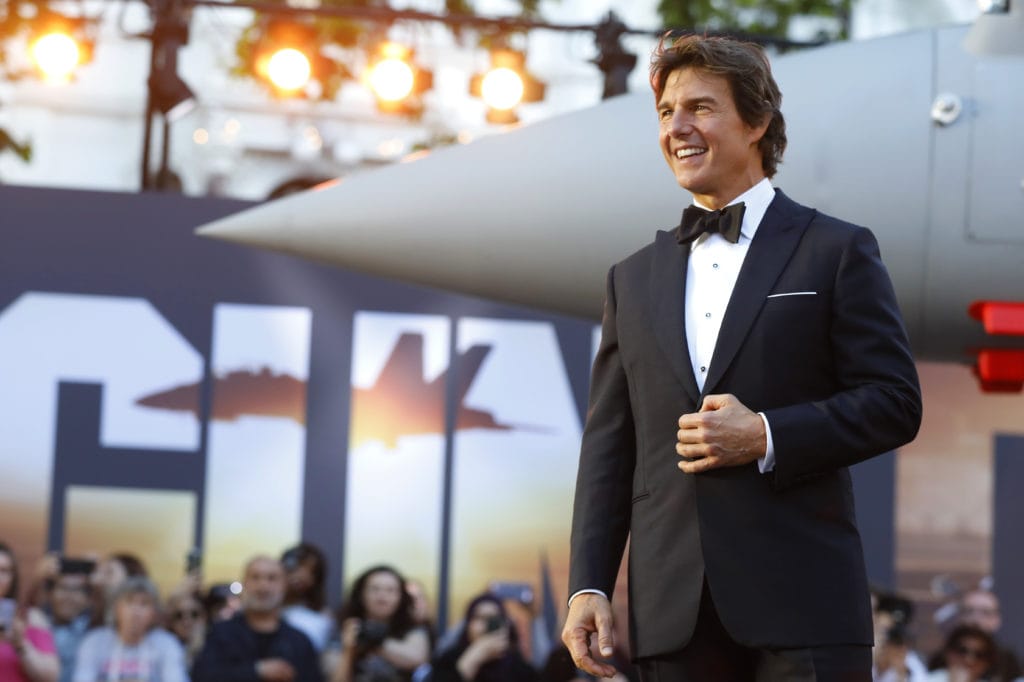 What makes Top Gun: Maverick great is its willingness to lean in on this aspect of Cruise. The cliche, the polish, the defiance, and the charm. His difference is a necessity to the story. In the age of the anti-hero, audiences were hungry for a redemption story in which the character seeking redemption is really, really likable. A story with sweetness and heart will never go away. Especially when that story takes place in f***ing fighter jets!

In a memorable early scene, Maverick is told that his kind is going extinct. The end is inevitable. With a winking reply, he looks back and says, “Maybe so sir, but not today.” He’s noticeably alone in the frame. Maverick is addressing his Admiral, but Tom Cruise is addressing the entire entertainment industry.

Top Gun: Maverick was supposed to hit theaters in June of 2020. Like every other movie set to release during the pandemic, it suffered unprecedented dilemmas against an unknowable timetable. Studios scrambled and debate over the future of distribution ensued. Covid was the great accelerant. Would it expedite the demise of a struggling movie theater business?

Box office decline in the emergence of streaming is well documented. Less clear, is if it’s causation or correlation. Are people skipping the theater because of the content on the screen or the convenience of their couch? It’s somewhere in between. Giving this zero-sum thinking has led to some of the most unwarranted bets in entertainment.

Studios began selling off their films to streamers to mitigate risk or boost subscriptions for proprietary platforms. Was this effective? Yes and no. It was successful for some, and unsuccessful for others. You can copy the perceived leader and still fail miserably.

Meanwhile, Top Gun: Maverick remained in the can. Cruise had controlling stake in its release. He obsesses over what audiences want to experience. And for over ten years, people have been experiencing the same type of big-screen movie. How much computer generated imagery of comic book characters punching each other with extreme self-reference can an audience watch before it all starts to look the same? We were due for a zag in all this zigging.

Cruise knew they had a well-executed and more intimate blockbuster with stunning practical effects and a moving story. He knew they had something different.

With the assurance of a four-decades long movie star that their film was special, his producing partners were less worried about what other studios were doing. They held its release, going all-in on Maverick’s distinction as a truly theatrical event. The movie is a 137-minute showcase for the unique magic of a big-screen experience.

Streaming platforms have created amazing value for consumers, but streamers are the rails. The movie is the ride. Audiences come for the ride. Stories transcend the ways in which they are told. 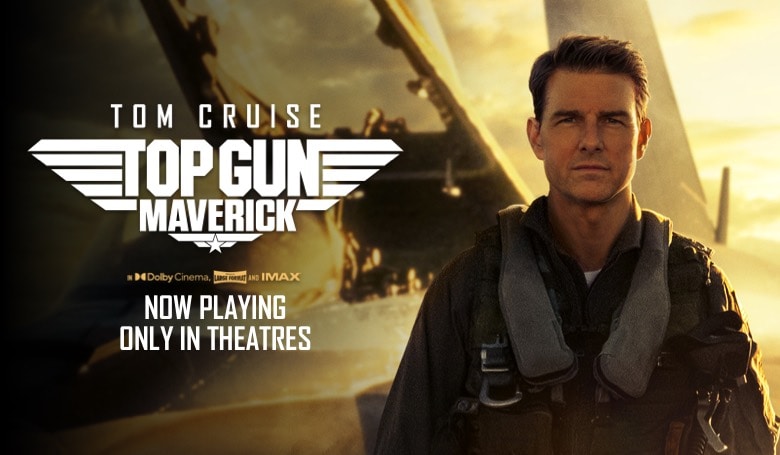 On May 27th, 2022, after nearly three years in waiting, Top Gun: Maverick flew into theaters. It’s everything people hoped it would be. It’s everything Cruise knew it would be. It has grossed more than $1.45 billion in box office earnings and is the 5th highest grossing movie of all time, domestically. And as a reaction, the industry is rethinking its distribution strategy.

It’s really, really hard to make good things. So much has to go right. To believe you can copy your competitor’s and get the same result is to discredit that complexity. And to promise “the best” obfuscates your advantages and forms tenuous relationships with consumers. It’s not a dogfight you want to be in.

Cruise bet on his film’s difference during a time when many felt they had to go one way, and he won. He made it for a movie theater experience. To relinquish that because of what others were doing would corrupt its own value. It’s not the best movie ever made, but that’s the point. It never had to be.

In the end, Maverick saves the day again, flying the dangerous impulsive way he’s known for. And we’ll be his wingman anytime.