Hacking in the Queen City

Here at Hyperquake, everyone knows everyone. Even those of us who are relatively new to the game quickly develop that particular skill of sensing the timbre of a room, reading into the connotation of someone’s wording, and even predicting how each member of your team might react to a solution. When you’re creating things for a living, you can’t just rely on killer conceptual or executional skills; the final result is ineffably influenced by informal and formal feedback, and that process is improved with familiarity. In an industry that moves as rapidly as ours, there’s a lot to be said for constructing a team that knows itself well and works together seamlessly. 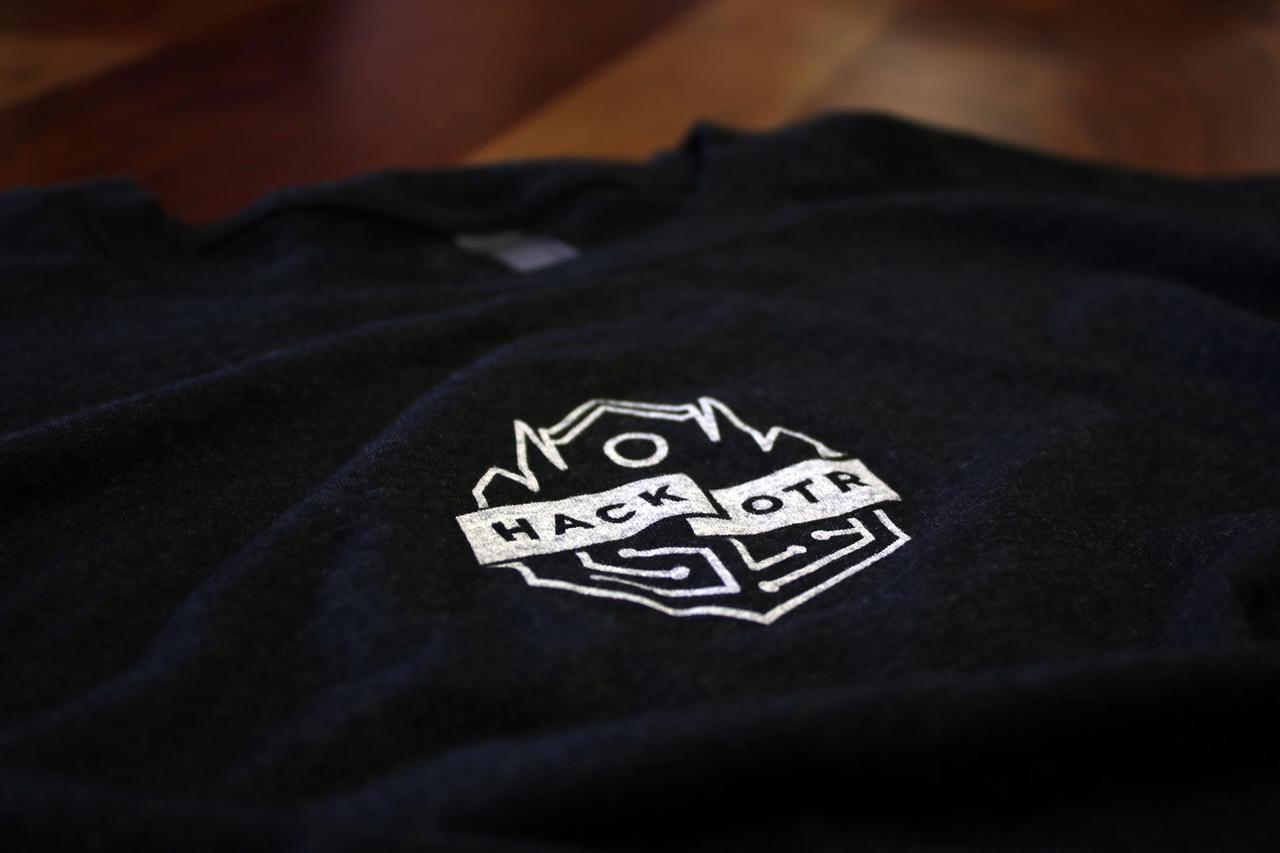 HACKING IN THE QUEEN CITY.

But this weekend, I had the opportunity to work in an entirely new way. The Brandery, an Over-the-Rhine startup accelerator with whom we’ve collaborated in the past, hosted their first twenty-four-hour Hackathon on March 7-8. The premise was simple:

(1) Show up in a room full of strangers.
(2) Split yourself into groups of 3-5, comprising developers, marketers and designers.
(3) Come up with an original, compelling startup concept.
(4) Make it happen. (Assisted by pizza, Holtman’s doughnuts and, when sleep deprivation threatens to strike, energy drinks.)
(5) Make your final pitch. 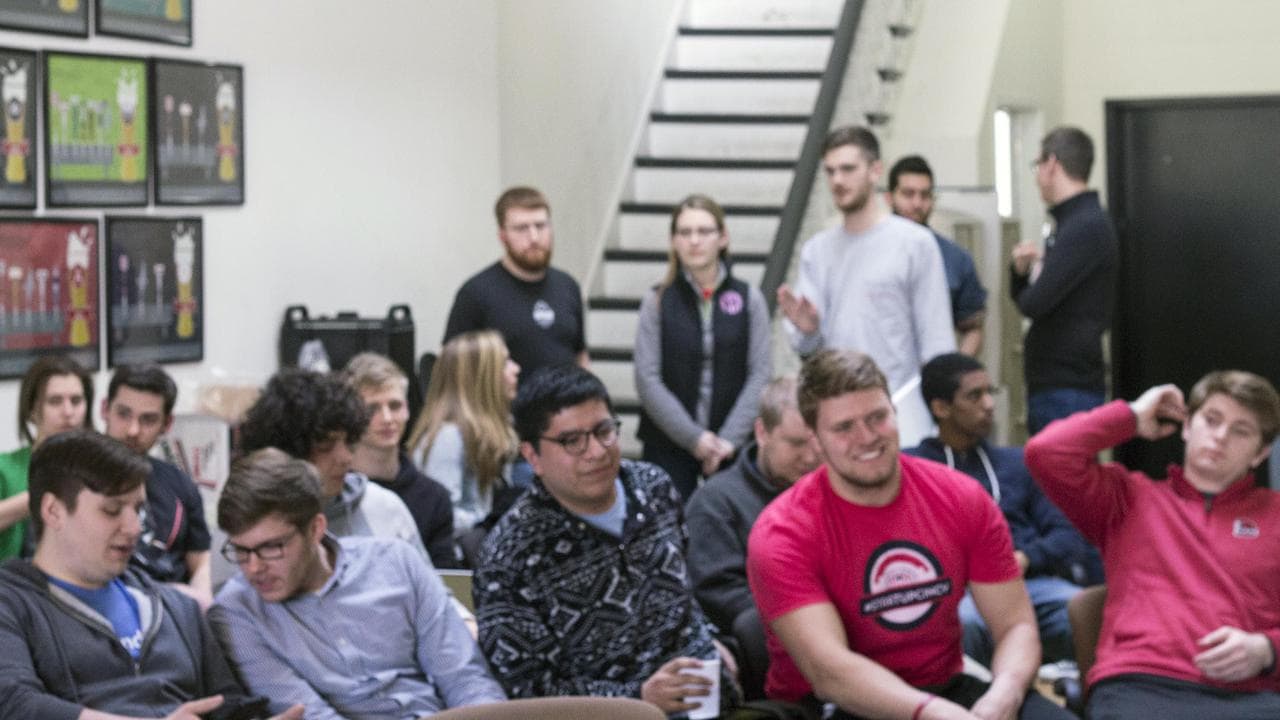 Watching the final pitches. Still a dapper group of designers, developers and marketers, even 23 hours in.

THROUGH THE EYES OF A FIRST-TIME HACKER.

In our team of five strangers — one designer, two developers, one brand manager and a college freshman who pitched our concept with eloquence — we made something to be proud of. It seems it impressed the judges, because we won Overall Best Hack. And it was, honestly, the direct result of never having met these people in my life. I’ve worked rapidly before — in fact, it’s my favorite way to work — but I’ve never been challenged in quite this way. And thank goodness for that — because you never learn as fast as you do when you’re miles out of your comfort zone.

(1) If it sucks, just let it go. Ninety minutes into the Hackathon, each team gave a short concept pitch to get feedback from the broader group. Following our concept pitch, we were all feeling growing doubt over the executability and even the value of our initial concept. And when you only have hours left ’til sunrise, you can’t be afraid to speak your mind when something doesn’t feel right. We vocalized our doubts and selected a different (winning) concept within twenty minutes.

(2) Remember what you’re designing. This was a hackathon, so the output was to be a functioning interface. The design mattered, but it was only one of four categories on which we’d be judged. I quickly learned to prioritize tasks based on added value for our team and product. I honestly used the very first typeface I thought of and the very first color palette I constructed, and spent perhaps 90 seconds on the logo. It felt careless at first, but it allowed me to focus on the user interface — which, ultimately, was a big factor in our win. 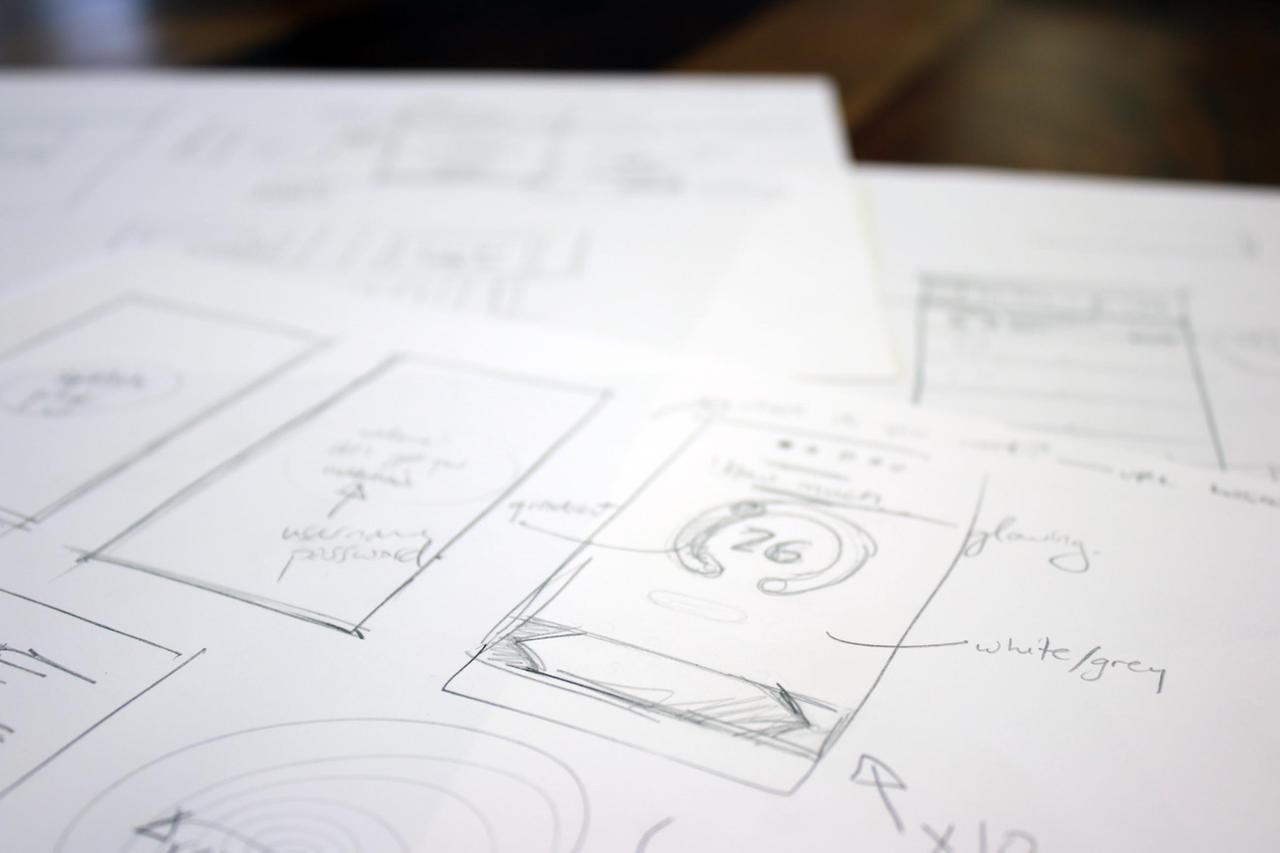 There’s a big difference between being careless and being efficient. That mentality became apparent in our process work.

(3) Design to be understood. Speaking of the UI….Our concept was most suited for a website or web app, but I chose to design our pitch deck to showcase it as an iOS app. This choice threw some people, but I stand by it, and the reason is this: when a designer has less real estate, she is forced to make choices. Fewer tasks per screen means more clarity for the user — and, in this case, for the audience. This was a totally new concept that we had only 180 seconds to pitch; it had to be 100% intuitive. That means a smaller screen — a user flow broken up into bite-sized pieces. (We were still able to construct the prototype as a web app so that our audience could see the value in both.) 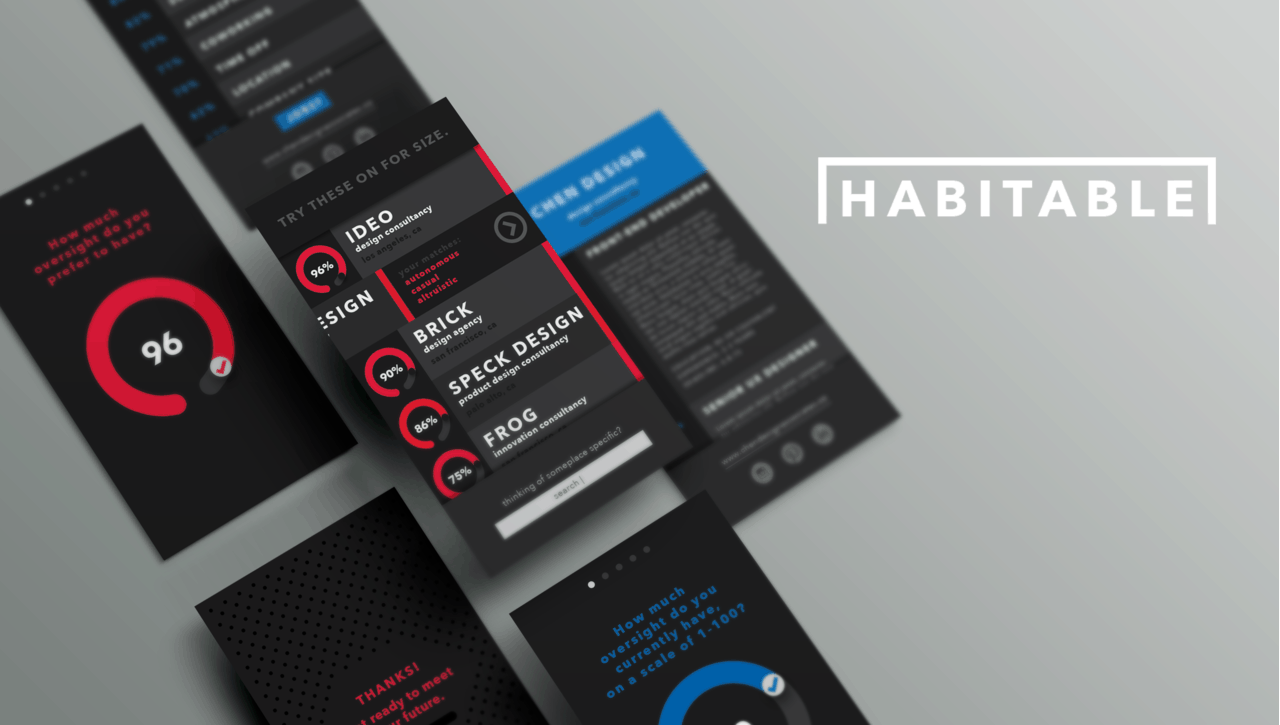 A portion of the interface designs presented by my team during our final pitch.

Ultimately, everyone wants a tight-knit team where individual contributions are clear and strong. That’s how we make it work at Hyperquake, and it’s my understanding that such an unbreakable team commitment is non-negotiable for a true startup. Knowing that someone always has your back opens up channels for taking risks over the long-term. That’s the reason a hackathon like this can be so uncomfortable — there’s no guarantee that you’ll have something unique to contribute, or that your team will listen to your critiques, or that you will even be functioning after the first sixteen hours. There’s no commitment to each other. But the stakes are also much lower, and the risks you can take are extremely short-term. Uncomfortable can be good. Fast can be good. Not censoring your opinions can be good. Designing constraints so that you simply don’t have time to introduce anything extraneous into the equation — particularly at the beginning of a creative process — can create results both quick and unexpected. And these are lessons that don’t have to stay within the walls of any hackathon. This style of working has value for every project that’s dragging its heels, at every overburdened agency, everywhere—for developers and designers alike.

Because the first Hackathon was a rousing success, The Brandery is hosting a second Hackathon on August 7-8 at their OTR location. Whether you’re already involved in the startup scene or (like yours truly) totally green, it’s worth your time. Just make sure to rest up. 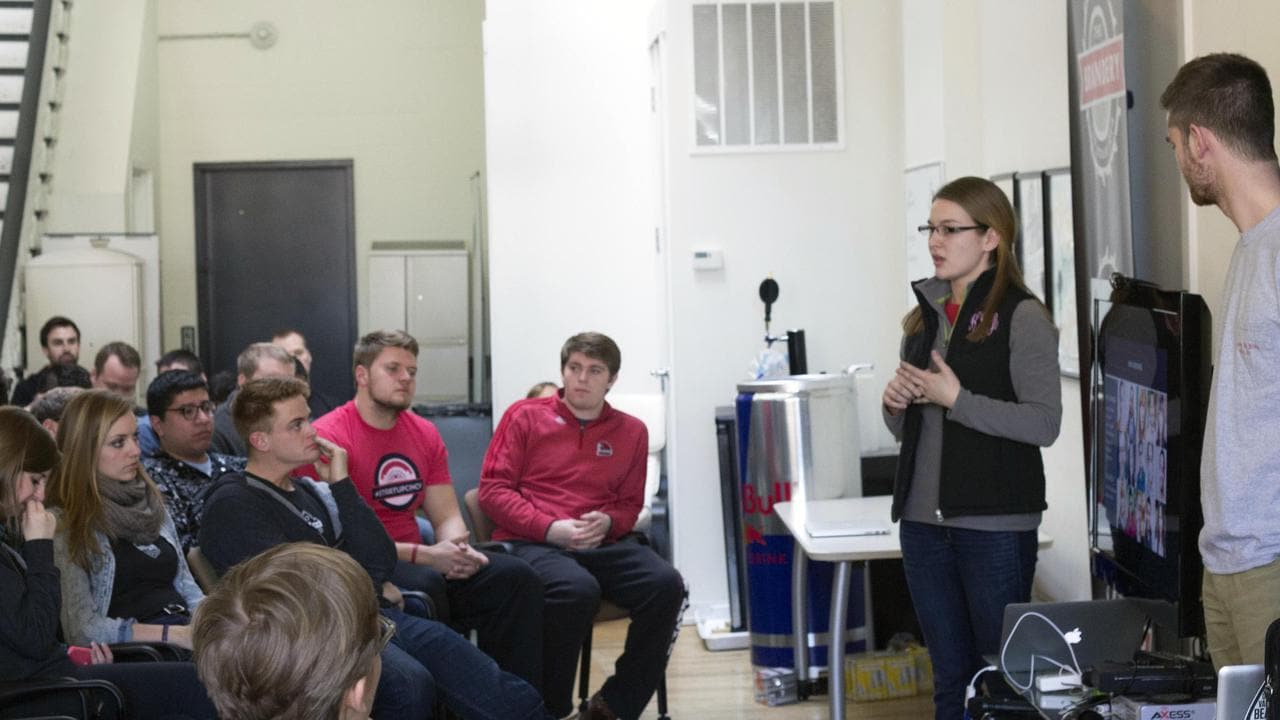 Next time, it could be you up there, pitching your big idea!