We’re 25+ years into this game and nearly three-quarters of its practitioners can’t say whether the $62.29 billion dollars collectively spent last year have generated a return.

In 2005 CBS was drumming up attention for a few specials they were about to air, and they decided they needed something different to grab consumers’ (and advertisers’) attention. Experiential marketing tactics were just starting to gain traction in corporate boardrooms, and our group was contacted about doing something “out of the box” to grab the public’s attention. Magazine ad buys were the heavyweight contender of pop culture zeitgeist placement, but the team at CBS wanted something “special.” That season CBS had the rights to a brilliant Made-for-TV movie called Spring Break Shark Attack which DVD TALK accurately described as “basically Beverly Hills 90210 with sharks.” There was also a show about Elvis, because sharks and Elvis are basically synonymous.

So we pitched something we figured would get us laughed out of the room.

We’d pay some people a little cash (we called it a “street team”) and get them to wake up early, put on shark outfits, and stand in front of the window of Studio 1A at the Today Show so Matt Lauer (remember him?) and Katie Couric might notice them and laugh. 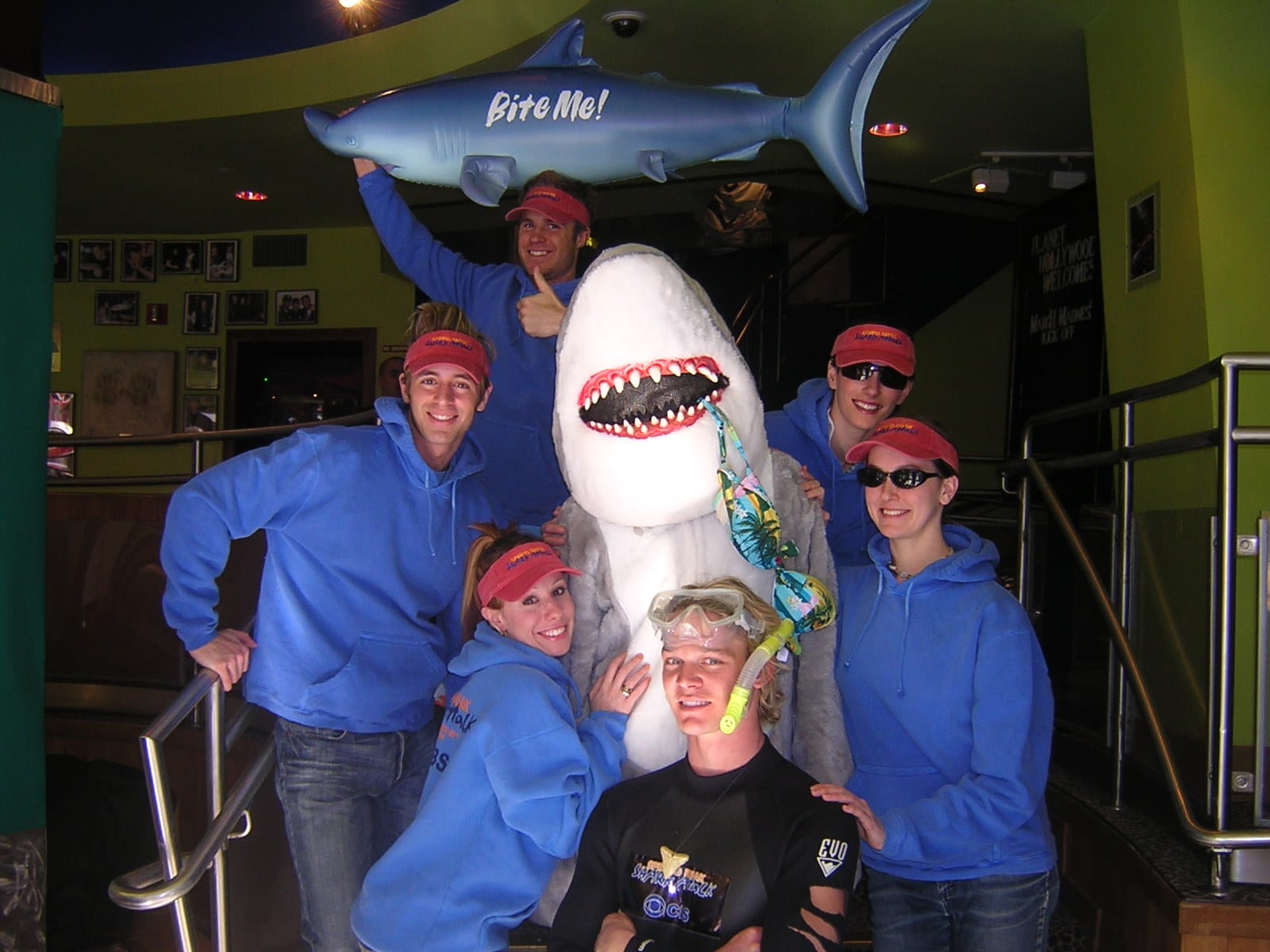 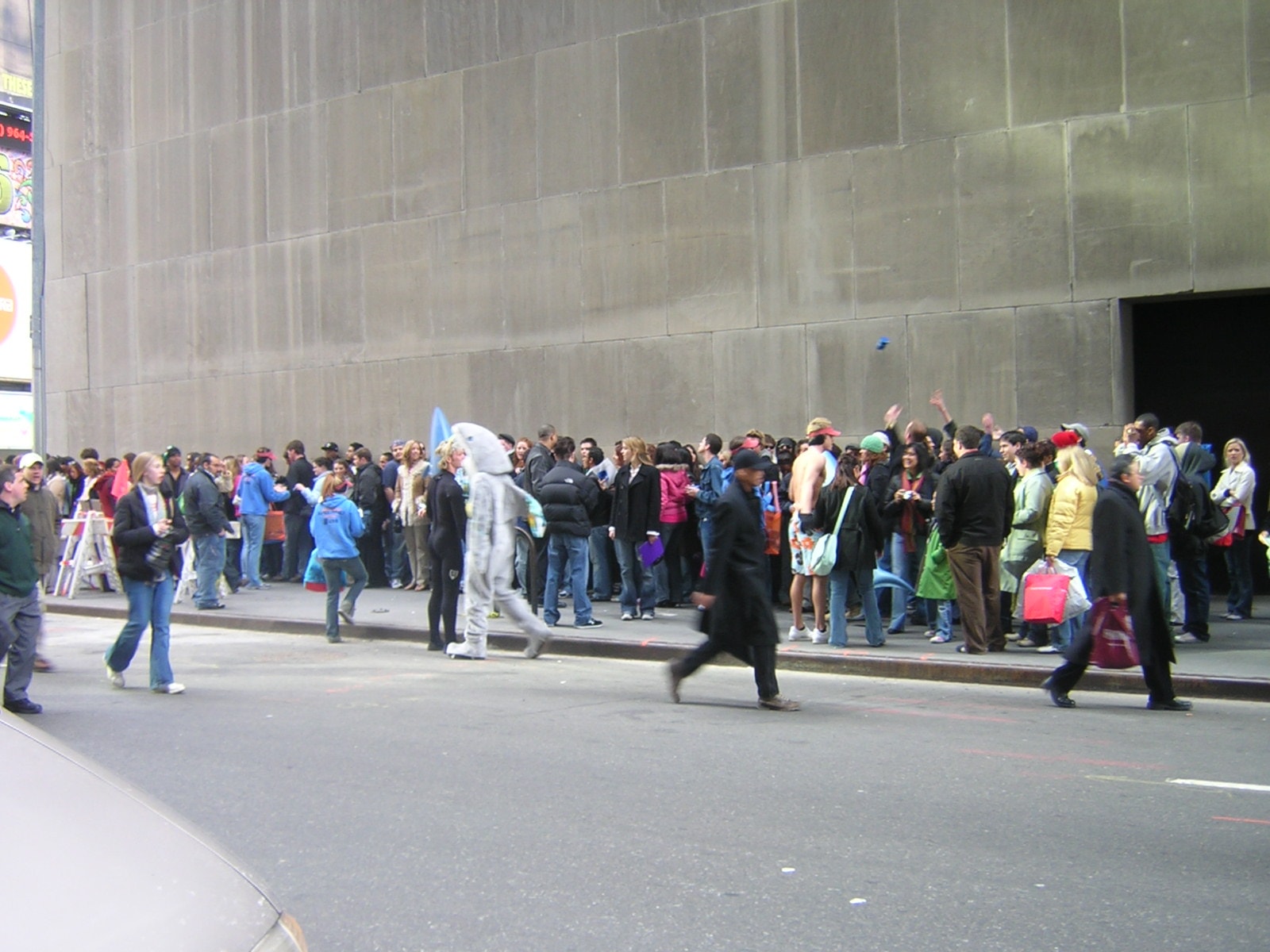 The CBS team bought it hook, line and sinker (too soon?). The shark outfits got A LOT of free camera time, and there were a few more Elvis impersonators than normal walking around Times Square with CBS on their backs and blue suede shoes on their feet. The team called it a success, and our “experiential marketing” division was off to the races.

But before anybody takes too much credit, let me be clear: we didn’t invent anything.

“Experiential marketing” has been around as long as one homo sapien has looked to beg, borrow, trade, or steal something of value from another hominid. I imagine a street market in ancient Rome had a tradesperson or two with a flair for the dramatic, and who could forget the snake oil salesmen of yesteryear, with their cobra’s venomous fangs dripping an antidote to all life’s ailments into a glass jar right in front of the crowd? Leave it to a group of modern marketers, though, to brand the practice, sell it up the chain, and get paid to make grown adults play dress up.

In 1998 Pine & Gilmore, two researchers based in Cleveland, OH published a Harvard Business Review article claiming we were about to enter the next great economic shift, dubbed “the Experience Economy.”

If humans had lived in an agrarian economic system for basically all of recorded human history, then the industrial and service economies that followed were relative blinks of an eye. But in this new experience economy, they hypothesized that in order for brands to stay competitive and not slide into a commodity position in the market they “must orchestrate memorable connections for their stakeholders, as the memories become the product – the experience.”

For a few years, their predictions weren’t born out in the market, as the service economy continued to reign supreme. But slowly Personal Consumption Expenditures (PCE) began to shift. Fast forward to 2020, and the economic impact of the experience economy is impossible to ignore. In a McKinsey study from 2018 consumer spending on experiences was growing 4x faster than spending on goods and services. One only needed to glance at a news article during CES, South by Southwest, Coachella, or any other of the hundreds of gatherings, festivals, and shows where people were congregating together to pay money for the privilege of being sold by brands large and small.

And the world was suddenly faced with a cataclysmic halt to not just the experience economy, but any semblance of an economy functioning normally. So what happens to experiential marketing when there are no experiences allowed? What if the dirty little secret is “Who cares?”

Experiential marketing has come a long way since shark heads and street teams in the mid-’90s. In an article titled “Marketers expect experiential budgets to increase in 2020” (destined for the “Got That One Wrong” time machine) Linsay Stein of CampaignUS breaks down a piece of research conveniently conducted by a brand experience agency called EA. In their research findings more than half (53 percent) of brand marketers surveyed expected to see an increase in their experiential budgets in the budget year 2020, with an average growth rate of an eye-popping 21 percent. Even more unbelievable, the same piece of research points out that 69 percent of those same marketers still struggle to prove the ROI of their events. For those of you not as savvy in the acronym game, ROI stands for “Return On Investment.” Or for simpletons like me, ROI stands for “Did I make any money on the money I spent to make money?”

WTF experiential marketing? We’re 20 years into this shell game of a discipline, and nearly three-quarters of its practitioners can’t say with any certainty whether the $62.29 billion dollars we collectively spent have generated a return? That’s INSANE. And to make matters worse, we have articles pumped out nearly daily in publications like Forbes and others with sensational titles like “Experiential Marketing Is The Future Of Retail” and “Ads are Out, Experiences are In.”

Over the last 5 months, our team has had countless conversations with corporate executives, gaming out all sorts of scenarios for a return to the “next normal” and with consideration for the events and experiences that will reappear to gather people together. And over and over, a common thread gets tugged in these conversations, one that confirms that experiential marketing doesn’t deserve to come back in its prior form, but offers a hopeful alternative to what may re-emerge.

The Great Pause brought about by this global pandemic has given many of us a chance to step back and consider what value (if any) we are bringing to the humans who flock to the massive carnivals of branded experience we built, and what value we will be expected to bring in the future.

A few of us have started to realize, with some sobriety, that we’ve likely jumped the shark as an industry (too soon?) and will need to remind people “Why” brands originally desired to connect directly with their consumers.

What are you missing most deeply as this year rages on?

For me, it’s the personal connection with extended family, my closest friends, and my co-workers who I genuinely enjoy working alongside. It’s missing the physical time alongside clients we consider friends, with whom we make genuine connections as human beings. And the sharks and Elvis suits and fully constructed set pieces outside Austin (I’m looking at you SXSW Westworld experience) are all well and good pre-COVID, but post-COVID we need a damn good reason to gather together physically, and the bullshit experiences aren’t going to cut it.

Pine and Gilmore said brands “must orchestrate memorable connections for their stakeholders, as the memories become the product – the experience.” And the memories to be made by our industry should be ones that gather people purposefully, to connect us in ways we haven’t imagined, and for a collective good that’s desperately needed right now. What if we stopped the experiential one-upmanship, and seized the opportunity to re-connect to the company’s purpose and to design experiences intended to connect the right people to that brand purpose in ways that deliver memory and connection stronger than any shark skin we might put on.

Experiential marketing doesn’t deserve to come back the way it was.

When it returns, it must respect the power harnessed in bringing people together physically to share in a collective experience, and the responsibility to do so in a way that builds the collective good, and doesn’t simply spend on shiny objects and superficial sizzle. May we all do better than before.