“Treehouse City, that is were you belong.” This is how my Turkish boss finally acknowledged that he understood who I was as a person. In 2010, I worked at Lokal, a restaurant in Greenpoint, Brooklyn owned by two Turkish men. It took them a while to pin the personality of their newest waitress, but when they did they gave me travel advice that would change my perspective on life.

Years later, I met a man in a Cincinnati bar and one of the first things we talked about was where we would travel if we could go anywhere, my answer was Treehouse City in Turkey. A couple months later, my now husband and I started planning our trip to the treehouses and the community that helped us plan our journey online was equally as amazing as the community we met in person when we arrived in Olympos, Turkey.

We started our planning on LonelyPlanet.com and Airbnb.com where other adventurers shared their tales of the treehouse experience in and around Olympos, Turkey. We connected with other couples that had stayed at ‘penchants’, family run hostels, in the area and found the perfect place that suited our budget, lifestyle and location preferences. Not only did we find our accommodations, but also were given tips and tricks on how to get there from their airport, who to buy fresh coconuts and clams from on the beach and what times to stay in the shade.

Once we arrived at the airport in Turkey, we were met with smiles from an old man and his grandson that would drive us on the windy, mountainous trek down to Treehouse City (also a recommendation from our Lonely Planet friends). Upon arrival to Bayram’s Treehouses, we were greeted as new members of their penchant family, they were especially excited that we were American visitors, apparently not many Americans know about this place. 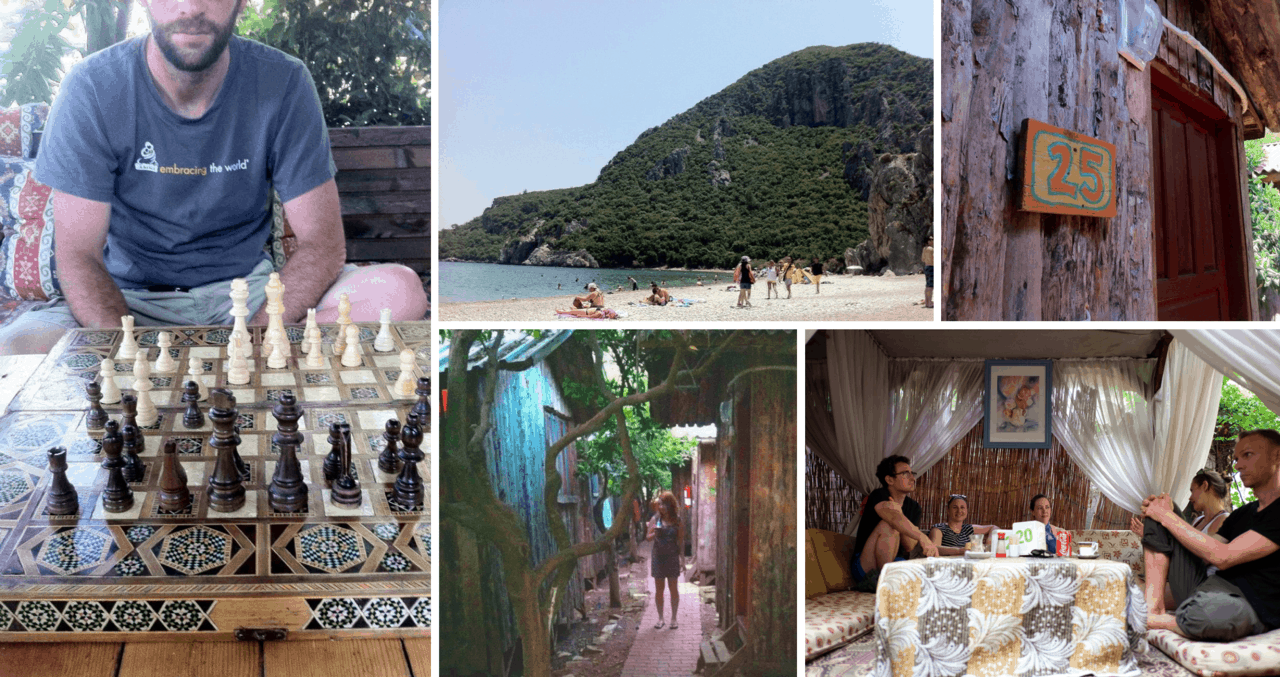 We arrived in time to eat the dinner that was included with the accommodations, we mounded our plates with the delicious food prepared by the mothers of the Bayrams Treehouse owners and we sat on long picnic tables filled with new friends from across the globe. Each day during the hottest hours these same new friends flooded back into Bayrams Treehouses to play chess, read books, trade stories and facebook information with each other, uniting as the new ‘global locals’ for the week.

By the end of the week we had formed close bonds with our fellow travelers; the chess wiz from England, the wandering Kiwis from New Zealand, the bartender from Australia and the Turkish boy that sold stuffed clams made by his grandmother on the beach. From a restaurant in Brooklyn, to computers in Ohio, to our dream tree house in Turkey, the Global traveling community guided us through each step both online and in person.