In past Artifacts we discussed The Beatles and the hope that defined the pre-Vietnam generations. But what goes up must come down. Did you think this whole series was going to be all peace and love? Well…not so fast my friend. “All You Need is Love” is about to become “Revolution #9.”

Welcome to the story of Generation X.

Born between 1965 and 1976, Generation X is now roughly between 40 and 55 years old, and in the core of their “earning years.” For brands this means they have spending power that can’t be ignored.

But being ignored is exactly
what defines Generation X. 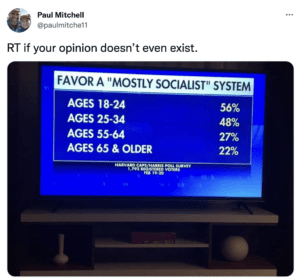 So how do you connect with a generation whose major defining trait is disconnection? Well, you start by digging a bit deeper.

Generation X were born on the heels of two of the most iconic generations in US history. Their parents and grandparents lived through WWII and the depression, and their primary values and drivers were defined by either the scarcity of those eras, or the prosperity that immediately followed. By contrast, Generation X “had everything” from shiny consumer electronics to instant meals from the freezer, but struggled to find out what it all meant.

For the generations before them the threats were external: World wars,

Economic collapse. For Gen X the threats were increasingly internal: Loss of

identity and purpose, and The increasing emptiness of the American Dream.

Things Get A Little Darker

Gen X was born just as the Western World realized things wouldn’t get better forever, and that a lot of our “progress” was at the expense of other important things and people. Maybe we needed to pare back a little. Maybe things weren’t always going to be okay.

Society was coming apart at the seams. It was the late 20th century and women still couldn’t successfully apply for credit or get equal pay. The hope of the ’60s ran straight into Nixon and the war in Vietnam. Divorce rates and gas prices skyrocketed. Birth rates plummeted.

The angst and snark that resulted was powerfully portrayed in films like “Reality Bites” and “Pump Up the Volume.” The increasing frustration with racial and gender inequality showed up in Spike Lee’s “Do the Right Thing” and John Singleton’s “Boyz n the Hood.” But perhaps the most iconic Gen X movie was “The Breakfast Club” – a story of a Saturday wasted in detention…troublemakers locked away so parents and teachers could go on with their lives. It seemed the perfect summation for the latchkey generation’s entire invisible adolescence.

And yet that film is ultimately a story of finding community in that isolation. The film’s closing song, Simple Minds’ “Don’t You (Forget About Me),” is an plea to avoid the isolation Gen X is known for.

Will you stand above me?
Look my way, never love me
Will you recognize me?
Call my name or walk on by

As you walk on by
Will you call my name
Or will you walk away? 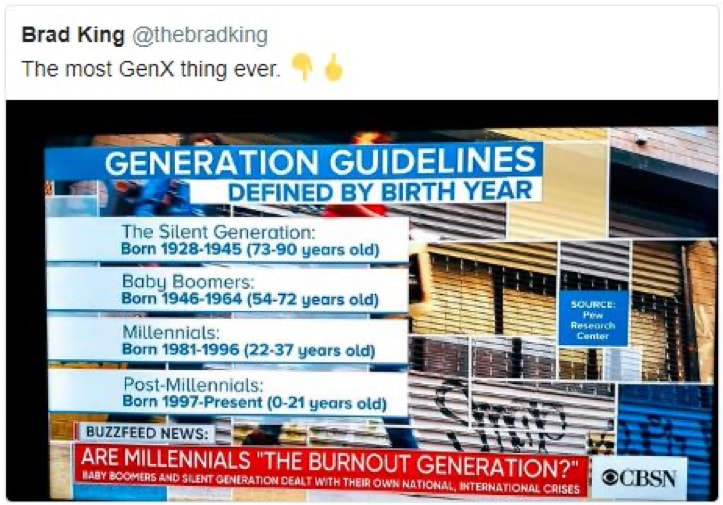 Today Generation X looks back on their childhoods with shock and amazement that they survived at all. With minimal parental supervision, and no consumer safety protections for things like smoking or seat belts, Gen X grew up feral and at risk. It makes sense that a generation of latchkey kids raised on the newest advances in processed foods would view Millennials and Gen Z as being coddled.

Obviously the pandemic years have been challenging for everyone. But perhaps there is no greater shift in fundamental values and priorities than the one we’ve seen in Gen X. MNI’s year-to-year values-tracking shows the idealism of “enjoying life,” “freedom,” and “self-reliance’ have been replaced by “protecting the family,” “stable relationships,” and “honesty.” Generation X are the torchbearers now. We are the adults in the room, caring for our petulant adolescent children on one hand, and the aging parents who left us to the wolves on the other. Generation X is coming to terms with the responsibility of caring for a world that did not appropriately care for them.

The result is…a lot of grief. We’re all experiencing the collective grief of the past 2.5 years, but for Generation X that grief is tied up in the death of adolescence and the embracing of late mid-life. Our mid-life crisis isn’t motorcycles and sports cars. It’s masks and vaccines. And yet Gen X faces this shift with the same wry humor through which we’ve always seen the world… as if to say “well – it makes as much sense as anything.”

So how do you relate to a generation that feels consistently overlooked? Look to the ways they have formed community within their generation. Generation X consistently uses their disaffectation as a sign-post for collective understanding. It’s a short cut to statements of meaning. Succinctly put: Cut through the crap and give us the real message.

Nowhere has this been better demonstrated than in Nike’s marketing to Gen X over the decades. Nike could be considered the first and most perfect Gen X brand. From the early Spike Lee “Mars Blackmon” ads, that put it bluntly: “This you can buy – you cannot do this,” to the iconic “Just Do It” campaign (first launched in 1987), Nike cut through the noise, and poked fun at empty promises of advertising and commercialism. The wry, self-aware campaigns both embraced and mocked the devices of capitalism and let Gen X feel they were in on the joke. This all may seem a bit dark and distressing, but for Gen X that angst is a part of our story. And great stories require elements of resistance that turn into a collective movement. ESG (environmental, social, and governance) and DEI (diversity, equity, and inclusion) initiatives are flooding the playbooks and websites of brands everywhere. The brands who do this well put philosophical considerations at the core of running a responsible business. For Generation X this means the difference between engaging consumers and fostering skepticism. Brands need to come forward with the kind of frank “warts-and-all” truth that Gen X has always ached for. They never sought the shine of the post-war American utopia because they were the generation that discovered it wasn’t real. They know the American ideal is a struggle, and you have to want it. Brands who don’t ignore, but feature that struggle in their story create better relationships with Gen X consumers by embracing the relationships that are at the core of their search for meaning.

There’s an argument to be made that Gen X was the last modernist generation before the postmodern millennials came along. We were so pissed off about the lack of truth and connection around us, precisely because we actually still believed truth and connection mattered. Those John Hughes movies Gen X is so known for? They’re connection movies. When everyone else drives off and forgets Sam at the end of “16 Candles,” Jake is there waiting for her.

Gen X doesn’t want or need to be the star, the war hero, the savior. We just want to feel connected. We may come across as acerbic and harsh, but we’re sentimental, even romantics at heart. Where our parents might have said, “Come together, right now…” Generation X simply says, “Don’t you, forget about [us].” 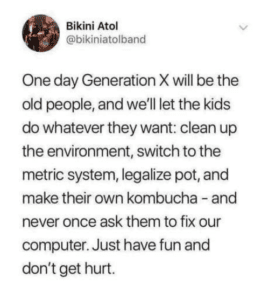